Transcript Of Q&A
Question 1 :  What inspired you and your team to remake fallout van buren and bring it back from the dead?
Answer For Question 1: Today's CRPGs can't hold my attention the way older ones did. Because of that I was losing interest in CRPGs and became frustrated with the fact that I might never play a game like Fallout 1 or 2 again in my life. So there I was at the end of 2013 trying to find a solution. I asked myself a question - what CRPG do you want to play? One of the classics that has been around for decades? - No. Something new yet in the same vein as the classics? - Yes, Van Buren, the canceled Fallout 3 from Black Isle Studios.
Since I have lots of experience with modding Fallout 2 and doing large projects on my own (privately and on my daily job), I was perfectly comfortable with the idea to do it on my own. It would take a long time but I can do it. So I started and posted about it on RPGCodex's forum. Soon, other fans started contacting me expressing support and even joining me as writers, musicians, artists, etc.
Question 2: You are using original design documents, developer interviews and forum posts as information to bring the original vision to life as close as you possibly can, Is it enough for a full game or do you have to add original ideas of your own to flesh the game out?
Answer For Question 2:  Yes, we have to rely on our own ideas and writing abilities in certain areas. We gathered plenty of information on the internet but that wasn't enough. The main plot was loosely defined while some locations and companions weren't written at all, merely mentioned. Changes to the game's famous SPECIAL system were also incomplete.
So we rolled up our sleeves and started filling those gaps in. We put some extra strain on ourselves by bringing back everything BIS cut from the game but we believe that's the only way to do it right.
Question 3: This is a personal question for  you Hexer, What is your favorite fallout game and why?
Answer For Question 3: My favorite Fallout game is Fallout 1. I love the atmosphere, the story, the world, and the music.
Question 4: Is there anyone from the original F3 van buren development team  working (or giving support ) to the project?
Answer For Question 4: Chris Avellone helped us with our questions related to the main plot and central characters. We plan on reaching out to other developers when we finish the Alpha version. If not with questions, then with information that Van Buren is happening after all and they'll get a chance to play it!
Question 5: I would have to ask of course! Is it possible to give me time frame of release, percentage of how much you have gotten done?
Answer For Question 5: We're currently assembling the Alpha version which is over 7 GB in size. Most of the music is done, the art is about 80% done, mapping is under way and we've finished about 40% of our maps, we are a little behind with dialogs lately although I'm certain our dozen writers won't disappoint. Changes to SPECIAL and scripting numerous quests are also under way although I will first need to finish the new art and mapping before working on it full time with our other programmer.
Voice acting and cinematics are last on our list of things to do so we only discussed them informatively although we secured voice actors for the Narrator and a few NPCs.
With all this in mind and considering our current pace of work, I don't see the game being released sooner than 2016. We want to make it right and certainly not rushed and disappointing!﻿ 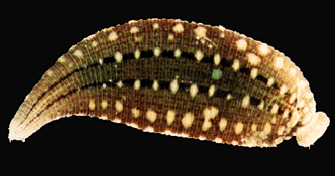 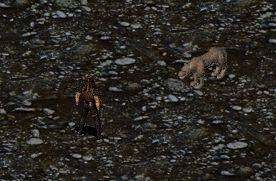 Look at these feral Glowing Ones ganging up upon our hero! Good thing they're statless so they can't hit him 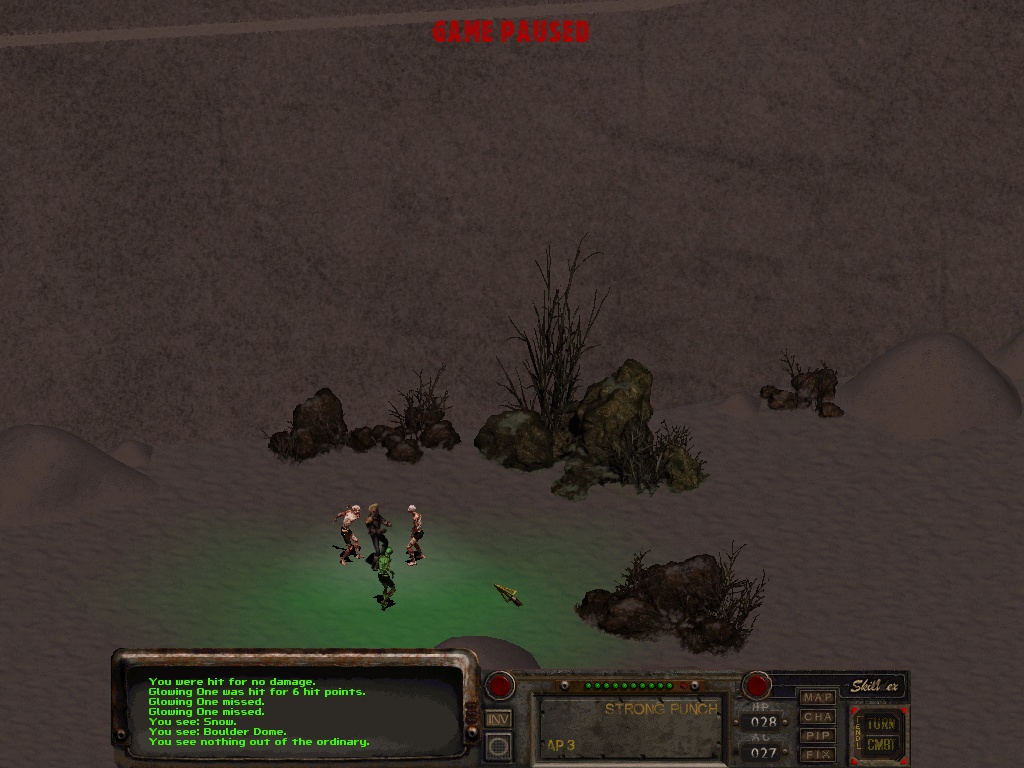 Sometimes I descend down to the bottom of the Grand Canyon to loot ancient uranium mines. But sometimes I drop everything and run for my life... 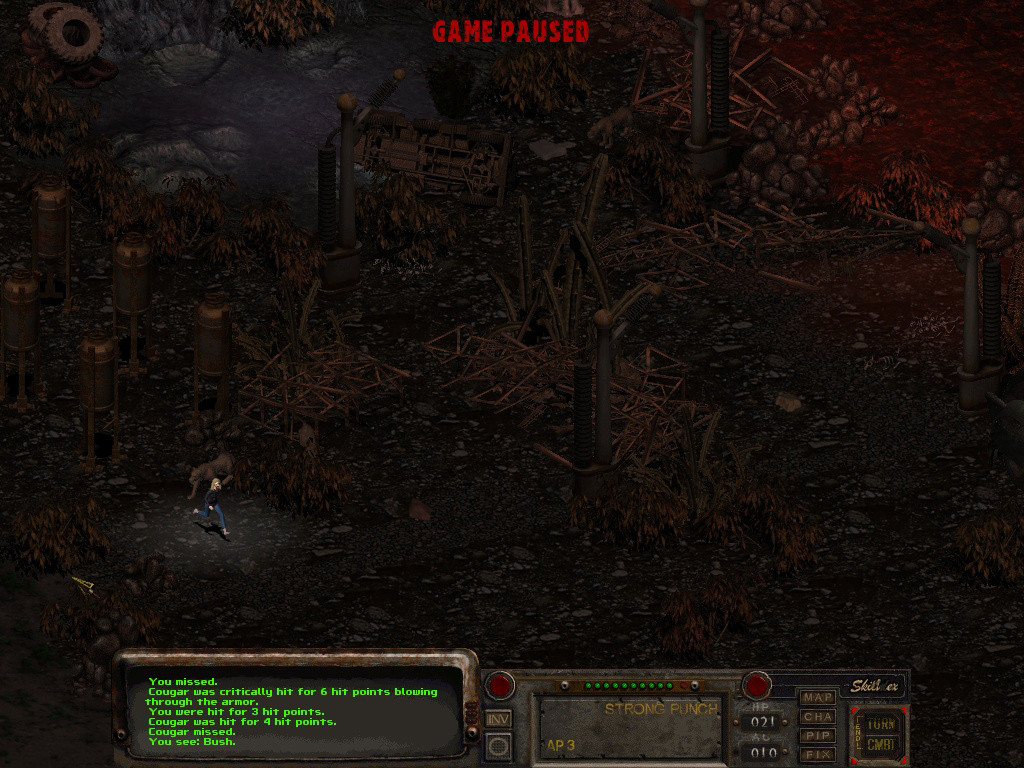 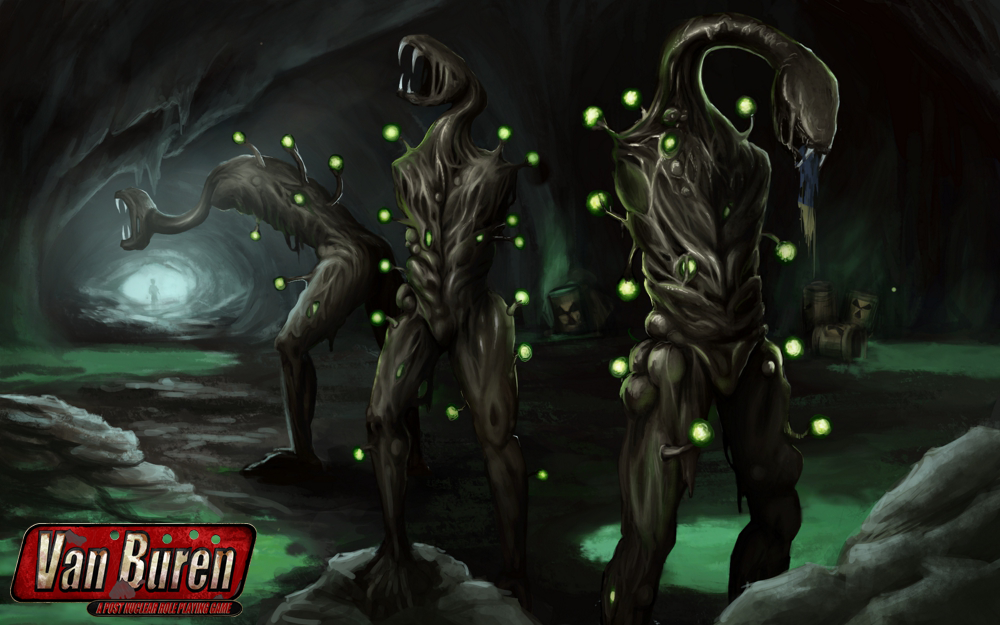